Posted on September 7, 2014 by Webmaster in Uncategorized

How this film came about

Development of this documentary was a labor of love. It was initially developed as a way of preserving one family’s story as a legacy for children and grandchildren. As we worked on the film we realized that Lydia’s story of how she escape the fate of the more than 2,200,000 Belorusians who lost their lives due to Nazi invasion and WWII needed to be shared with a wider audience. Through Lydia’s recollections our film gives voice to a nation of people whose experiences have been largely eclipsed by other Diaspora stories and stories of genocide. Although the film will likely be of interest to historians and those who marvel in stories of human perseverance, we imagine the film will hold special appeal to the many mid-century Eastern European immigrant families whose ancestors shared with Lydia a similar life trajectory. 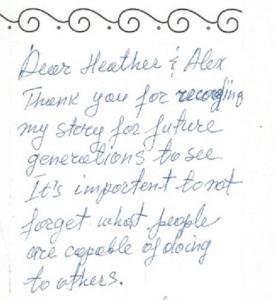 2 Responses to “How this film came about”